Upon the arrival, the head of state was traditionally interested in the state of affairs in agriculture: corn harvesting, winter plowing, and the state of winter crops. Gomel Oblast Governor Gennady Solovei briefed the president in detail on these and other issues. In his words, work has been stepped up in several areas and the necessary amount of machines has been deployed in the fields.

As for the Dobrush investment project, the head of state asked if the construction of the new factory had been completed. He was told that everything was finished. Aleksandr Lukashenko stressed the necessity to use all the wood resources. At the moment some types of wood are not involved in processing. The Dobrush Paper Mill capacities are not enough to process all the wood.

In this regard, the project to launch the production of bleached chemical-thermomechanical mass at the site of Mogilevkhimvolokno is under consideration. This is actually a semi-finished product for cardboard manufacturing in Dobrush.

According to Belarusian Deputy Prime Minister Yuri Nazarov, such a facility can cost $200-250 million. Negotiations with the investor are underway. The president instructed to work out the possibility of setting up such an enterprise with the help of the government funds.

Bellesbumprom Chairman Mikhail Kasko briefed the head of state on the performance of the concern and the modernization of the pulp and paper industry.

Despite the difficulties associated with the coronavirus pandemic, the Bellesbumprom organizations have been working steadily. The enterprises fulfill all the planned parameters of the country's social and economic development program. They are expected to implement all the annual plans. “We have the lowest inventory stocks. The demand is very good,” said Mikhail Kasko.

The concern's companies ensured growth of production and export of goods, profitability of sold products and other established indicators. By the end of the year, production is expected to exceed Br3 billion. Exports are to approach $900 million.

Thanks to the implementation of several investment projects supported by the state - both in wood processing and pulp and paper production - the industry has reached a completely new technological level, which provides a comprehensive, waste-free processing of wood resources and ensures highly marketable finished products with the greatest economic effect.

For example, the Bellesbumprom's production of furniture increased by 43.6%, that of fiberboard by 25%, chipboard - by 6%, and plywood - by 3.4%. In general, the range of products across the Bellesbumprom's enterprises currently includes about 75 types of goods.

"Some 81% of what we produce is exported. Our export is projected to increase by more than $250 million this year,” said the chairman of Bellesbumprom.

Aleksandr Lukashenko asked how things are at Bellesbumprom's troubled enterprises. In particular, he announced his intention to visit the FanDOK woodworking plant in Bobruisk. The head of state was also reported in detail on the state of affairs at Vitebskdrev and Borisovdrev.

Dobrush Paper Mill is one of the subsidiaries of the Belarusian Wallpaper holding company. Its director general Aleksandr Kolyada reported on the results of the investment project to upgrade the mill and to launch the production of coated and uncoated cardboard.

According to the director general, right after the launch of the coated and uncoated cardboard manufacture the mill reported positive financial indicators. In January-September, the output doubled (in actual prices) year-on-year, with the profitability of sales being at 5.5%. 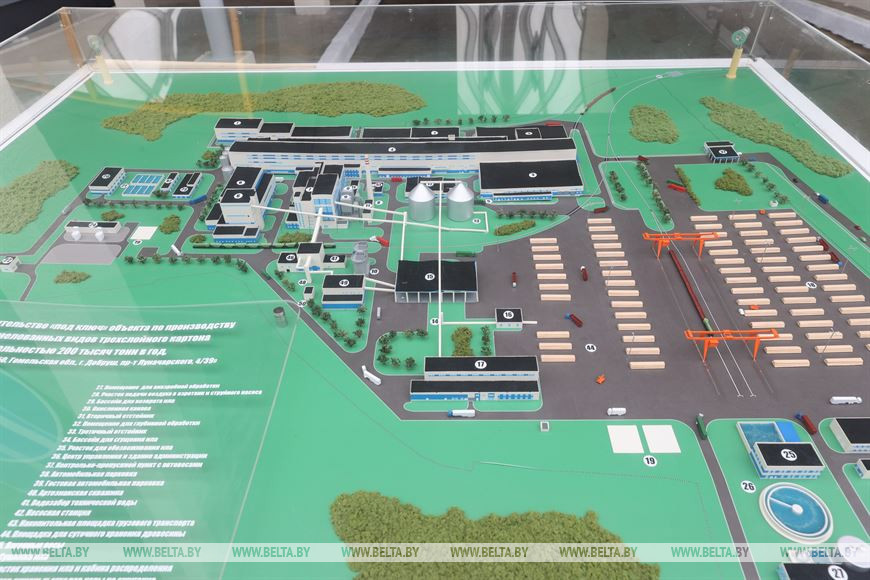 The launch of the pulp production in Belarus has made it possible to meet the need for raw materials of Bellesbumprom's enterprises and other producers of paper, cardboard and packaging.

Aleksandr Lukashenko was showed around the mill and got familiar with the principles of operation of the main technological equipment.

As BelTA has reported, Aleksandr Lukashenko visited Dobrush Paper Mill on 4 February 2020. Then, the president focused on the construction of the coated and uncoated cardboard plant, which was supposed to be commissioned in 2015. The project needed the help from the head of state to address some issues, including financial ones.

“This is a breakthrough project. They trolled us during the election campaign saying that ‘there are protests on the streets, and Lukashenko is busy with cardboard production'. I kept an eye on all the issues at that time, but this one is a big investment project,” Aleksandr Lukashenko said.

Today Belarus can manufacture cardboard products itself. “The demand is great. This project in Dobrush is a good one. We will go there and see. We should keep moving forward. We have launched a cardboard production. Now is the turn for packaging production. This is a very important sector,” the head of state said.